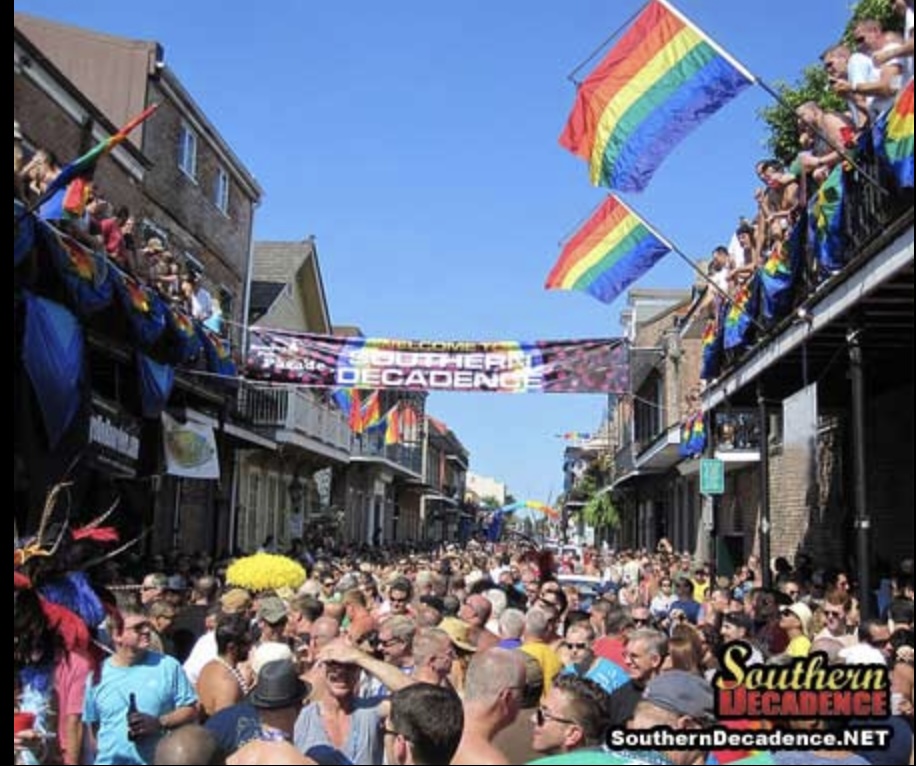 Southern Decadence started over fifty years ago as a simple going-away party. As a top gay Labor Day Weekend destination, it has evolved into one of our world’s major annual events.  It is one of the largest annual celebrations and festivals in New Orleans, and has become known as the “Gay Mardi Gras.”  People begin to arrive on the Wednesday before Labor Day, and generally don’t even think about stopping or going home until the following Tuesday.

Recent attendance has broken all records, with over 275,000 gay, lesbian, bisexual and transgender participants, and an economic impact estimated to be in excess of $285 million. Southern Decadence is one of the top five annual events in the City of New Orleans, along with Mardi Gras, Jazz Fest, Essence Festival, and French Quarter Festival.  As Liberace once said, “Too much of a good thing is wonderful.”

New Orleans’ wildest neighborhood gets even crazier as the French Quarter is packed for the entire event; however, the big day is Sunday. That’s when the Grand Marshals lead the annual walking parade through the streets beginning at 2 p.m.
The theme for 2022 is “Jazz. Burlesque. Decadent. New Orleans.” and the official colors are Gold and Red.

The corner of Bourbon and St. Ann Streets is generally considered to be the epicenter of Gay New Orleans, and even more so during the Southern  Decadence festival weekend.  At that intersection is the largest gay nightclub, The Bourbon Pub video bar and The Parade dance club, which is home to the hottest dancers in town.  And most of the city’s main gay attractions are within a few blocks.

Most street party activities take place in the immediate area of the French Quarter, and the dance parties are in the clubs. Since the gay bars never close, there is something happening around the clock.

The Bourbon Street Extravaganza, the FREE outdoor concert produced by Napoleon’s Itch, at the corner of Bourbon and St. Ann Streets on Saturday afternoon, will return in 2023 for its 16th anniversary. Pre-production for the 2023 concert is already in progress.

Want to join the discussion?
Feel free to contribute!

TALES OF THE COCKTAIL